Posted by stopthefurexchange on May 2, 2012 in Uncategorized

Monday: May 21st:
DEMONSTRATION
To carpool, meet at 7:30 am at the Safeway on 15th and John in the northwest corner of parking lot (1410 e John)
(You can also meet at the American Legend Warehouse at 8:15)

Tuesday, May 22nd
DEMONSTRATION
To carpool meet at 2:00 pm at the Safeway on 15th and John in the northwest corner of parking lot (1410 e John)
(you can also meet at the American Legend Warehouse at 2:45)

If you have any questions, please email seattleadl (at) riseup (dot) net

Posted by stopthefurexchange on March 23, 2012 in Uncategorized

Hello Anti-Fur Activists. Today starts the Weekend of Action to STOP THE
SEATTLE FUR EXCHANGE! Please take the time to call and email the main
henchmen and henchwomen of American Legend Cooperative (aka. Seattle Fur
Exchange) and let them know how you feel about the horrors of the fur
industry.

We hope to see you in Seattle this weekend. Please check out
stopthefurexchange.wordpress.com for more details on the schedule of
events.

The fur exchange uses the same law firm as a registered agent for both their non-profit coop and their for-profit corp.

Contact Sheri and kindly talk with her about the issues. Ask her if she really wants to be part of an industry that traps, gasses, and anally electrocutes animals for “fashion” by serving as it’s registered agent.

Be polite! It’s possible you could change her mind. She has plenty of great clients; she does not need AMERICAN LEGEND and may not even fully understand what they do.

Posted by stopthefurexchange on March 17, 2012 in Uncategorized

If you can spare a few bucks, we could really use it to offset the cost of the Convergence.  You can donate online here.

And thanks in advance!

Posted by stopthefurexchange on March 13, 2012 in Uncategorized

Friday, March 23rd
Candlelight Vigil
Meet at the Starbucks on Olive and Denny at 6:30
(please note: this silent vigil will be at the residence of someone who
contributes to the horror of the fur industry)

Saturday, March 24th
Demonstration at the Seattle Fur Exchange
Meet at 3rd and Mercer (outside of VegFest at Seattle Center Exhibition
Hall) at 1:30.
A charter bus will provide transportation.
The bus will leave at 2:00 sharp and should return by 4:30.

If you are coming from out of town, please email us at
seattleadl@riseup.net and let us know if you need help arranging
transportation or housing.

Posted by stopthefurexchange on July 13, 2011 in Uncategorized

Persecution of animal activists in Spain (English version) from tvanimalista on Vimeo.

The spanish12 from tvanimalista on Vimeo.

Taken from Green is the New Red

Twelve animal rights and environmental activists have been arrested in Spain and are being labeled “eco-terrorists.” Little information is available about this developing story right now, but some of the activists have worked with Igualdad Animal on open rescues, walking into factory farms where animals were being abused, documenting the animal welfare violations, and then rescuing some of the animals.

Some news outlets are reporting that the activists are alleged to have ties to the Animal Liberation Front. However, Javier Moreno, a spokesperson for the above-ground group Igualdad Animal (and one of those arrested), says his group has been targeted because the government hasn’t been able to actually catch the people committing ALF crimes. He called the attack on Igualdad Animal and Equanimal open-rescue activists “an attempt to criminalize animal rights movement” and said the eco-terrorism rhetoric is part of a continued campaign against all aspects of the animal rights movement.

“As they have no one to charge for the release of Minks, they have arrested several members Equanimal and Animal Equality in an attempt to criminalize the animal rights movement, as happens in other European countries,” he said. “The lobbies of animal exploitation and the powerful multinationals want to stop the animal movement and the repression is now coming to Spain.”

The sweeping arrests, accusing people of both above-ground and underground tactics, seem quite similar to the recent attacks on Austrian animal rights activists as “terrorists.” However, it is far too early to know.

Here is a video documenting an example of the tactic that is being called “eco-terrorism” by industry groups, both in the United States and internationally.

UPDATE: No prisoner support page yet, but you can donate to their legal support here (in English)

UPDATE 2: Official statement from Animal Equality. The Spanish government is saying the arrests are related to the recent release of mink from fur farms. Above-ground activists respond:

These two organisations, which define their activism as being non-violent, dedicate their efforts to raising public awareness of animal rights, by informing society of the consequences of the consumption of animal products and the promotion of alternatives. On the other hand, even though the organisations were not involved in the mink liberations, neither condemns these types of actions, to the extent that they defend the interests of all animals regardless of species, as none of the minks exploited by the fur industry deserves to live and die on a Spanish fur farm….

The animal exploitation lobbies and powerful multinationals wish to put the brakes on the animal rights movement in Spain, and now we are seeing the arrival of repression.

Update 4: Protests planned for San Francisco, Toronto, New York City, Washington DC and more. Post a link in the comments and I’ll add them. Also, a quick thing you can do is update your social media profile photos with the banner above.

UPDATE 6: Protest in Brussels, Belgium, Friday, 6/24 at 2 pm in front of the Spanish embassy (Wetenschapsstraat 19).

“…the treatment of those detained is currently adequate, although they are not being given a vegan diet. Some of the activists have declared themselves on hunger strike until they receive vegan food…They are calm, but strong and determined, and many people are currently working on this situation. Many thanks for all the support that has been received so far.

“You can make your support for the detained activists reach further by calling the police stations in Santiago de Compostela and A Coruña where they are currently being held and inquiring about the health of the activists..

The following is a suggested text to read:

“Hello. I am calling because I am concerned about the health of the activists who were arrested yesterday and who are currently being held in the police station. I would like to request that they be given a vegan diet.. I wish to express my concern for the health of those detained, and in particular, Sharon Nunez Gough, who has certain health problems.”

UPDATE 8: Leaflets and posters are available for download for the solidarity events.

Protest in Berlin, Germany, Friday, 6/24, at noon in front of the Spanish embassy (Lichtensteinallee 1)

Posted by stopthefurexchange on July 12, 2011 in Uncategorized

Hello.  Here’s a a video a Seattle activist made of some of the events at the Stop the Seattle Fur Exchange Weekend of Action 2011.

Until All Are Free…

Jail Support Rally for Our 3 Activists Arrested at Stop The Seattle Fur Exchange!

Posted by stopthefurexchange on May 24, 2011 in Uncategorized

They will be in jail all weekend and will need vegan food.  Please call and  politely request they receive adequate vegan meals.

We are posting bail for all three, so if you can donate anything to help get these folks back into the streets for the rest of the weekend, it’d be so appreciated! 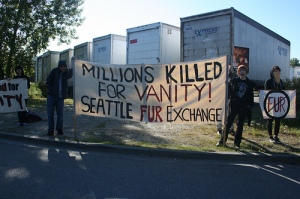 UPDATE:  Alex Payan, Kyle Oels & Kyle Terry have all been released from jail.  Thank you to everyone who called the jail and helped with financial support.  Donations are still appreciated for help with court related costs and can be sent to:

Report Back from the Jail Support Rally:

After a lively demo and lockdown blockade of the Seattle Fur Exchange (American Legend Cooperative), activists reconvened at the City of Renton Jail to show solidarity for the brave activists that had just been arrested.  The police quickly overreacted and brought out the riot crew to protect the entrance to the building, but the demo continued on.  Activists stuck around, people from around the country called the jail, and by about 4pm, the activists were released.  Thank you to everyone who helped contribute to the bail fund.

Stop The Seattle Fur Exchange!
Create a free website or blog at WordPress.com.